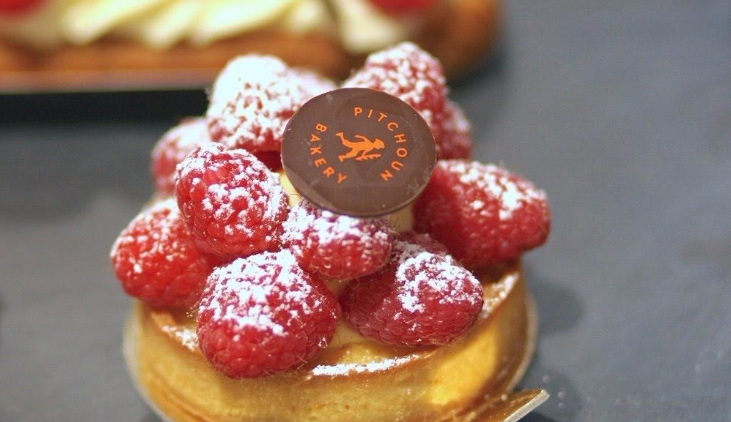 Have you ever felt you need to keep family tradition alive? Frédéric Soulies, owner of Pitchoun Bakery, comes from three generations of bakers, and it’s in his blood to bake. The entire concept behind his business is around memories with his grandparents. Soulies’ grandparents would always call him “Pitchoun,” which means “kiddo” in the south French dialect. And that’s where the name behind Pitchoun Bakery came from. It’s been a long journey for Soulies, from France to California, but it’s all been worth it to pursue his dream and keep the family tradition alive.

Soulies’s grandpa was a baker in Paris and made delicious, warm pastries for his local neighborhood. Soulies was very close to his grandpa and grew up playing with dough and baking with him. He fondly remembers the taste of his grandpa’s bread, and every time he bakes, he is reminded of his family and where he came from. Although his grandpa passed away recently, opening up Pitchoun Bakery is a way for Soulies to continue his family’s generation of bakers; it is a true representation of his roots and history.

After exploring the food industry in Europe, he felt ready to go to the United States with his family. It’s never too late to pursue your dream, and Soulies decided he wanted to open up a French bakery in California at the age of 40. He felt confident about his abilities given his inherited bakery knowledge paired with an education from the National Bakery School in Paris, not to mention a background in supplying products to three Michelin star chefs over the years.

After seeing the success of other cafes throughout the United States, he knew there was a demand in the market for authentic French bakeries. It took Soulies two years from the day he took his first leap as a small business owner to the day he opened up shop. Although there were a lot of hurdles, from construction to permits and late hours, he gave 300%, and it all paid off. Soulies opened Pitchoun Bakery in early 2015.

Advocating for an authentic French taste

The most important part of owning a bakery for Soulies is making sure he provides an authentic French taste. He uses his grandma’s recipes and is constantly inspired by every region of France when he experiments with new baked goods. Since Soulies uses raw ingredients and bakes everything from scratch, he goes out of his way to find the right ingredients to match French flavors—including sourcing, sampling, and testing different suppliers from France. He also loves being a one-stop shop for all types of French pastries. The downtown Los Angeles neighborhood has provided nothing but positive reception since Pitchoun Bakery’s doors opened. The City of Angels was waiting for a true taste of Paris!

Continuing three generations of bakers is one thing, but having the support of family throughout an entire journey is another. Soulies thanks his wife immensely, whom he created Pitchoun bakery with. His wife helps heavily with marketing, design, and communication efforts behind the bakery. As a family business, he has a strong partnership with his wife and believes they are the perfect match, both personally and professionally. After 20 years of marriage and three kids, Soulies hopes to one day pass down the family business to the next generation.

Soulies has grown tremendously since opening up Pitchoun Bakery. He learned what goes into the everyday life of being a business owner and how to satisfy customers, while still coming up with new recipes and never losing his love and passion for baking. Soulies even shared some words of advice to first-time business owners: “Never give up because you’re going through different tasks from construction to hiring and setting up an entire business. Sometimes you feel like giving up but when clients come in happy, everything is worth it. My best advice is simple: never give up.”

Soulies is currently looking to expand his business and open another location in Los Angeles. If you’re ever in Downtown Los Angeles, make sure to stop by Pitchoun Bakery for a delicious pastry or sandwich!